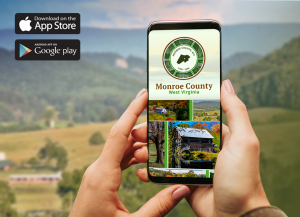 Secluded in the Allegheny Highlands, present-day Monroe County remained a land unseen for several generations of early Virginia colonists. The first settlers arrived around 1760, beginning a 30-year period of frontier conflict. Formation of Monroe as a separated County, separated from Greenbrier, came in 1799. The new County was named for James Monroe, Virginia's governor at the time.

Monroe's economic basis has always been farming and timber harvesting. Beginning around 1790, two additional activities were important for about 70 years. It was the age of water power, and streams such as Indian Creek and The Second Creek supported more than two dozen water-powered mills. During the same period, the area's mineral springs became major summer resorts, catering to Southerners seeking relief from lowland summer heat.

Monroe County supported the Confederate cause during the War between the States. When the Federal side carved the new State of West Virginia from Virginia in 1863 included Monroe County, a designation resisted by residents until 1865.

After the War, with the South's economy and social order devastated, the old resorts faded away. New railroads came nearby, but bypassed Monroe County except at more accessible edges. Steam power and newer forms of energy overshadowed water power. Lacking suitable coal deposits, Monroe County lies outside the area which encompasses most of West Virginia. For these reasons, "Old Monroe" relies largely on agriculture and retains its pastoral character. In recent times tranquil landscapes has attracted a number of artisans, retirees, and knowledge worker. 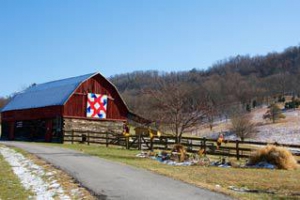 You are invited to take a trip back in time as you slow down and enjoy Monroe County's scenic countryside. For your pleasure we have displayed the artistry of the traditional quilt on a backdrop of historic barns and buildings, schools, and local businesses. 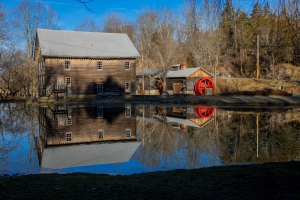 Cook's Old Mill was erected in 1858 on the site of the original mill dating to the late 1700's. Much restoration has been done by present and previous owners. Grounds are open to the public for photography, picnics and fishing. Mill tours can be arranged by request. 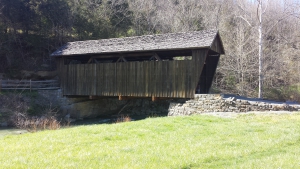 The Indian Creek Covered bridge was built by two teenagers in the early 1900s along the route which would later become US 219. The road closely followed an old Indian path known as the Seneca Trail, or alternately, The Warrior's Path. Present day US 219 doesn't vary too greatly from the course of the footpath used by tribes of the Iroquois Nation.